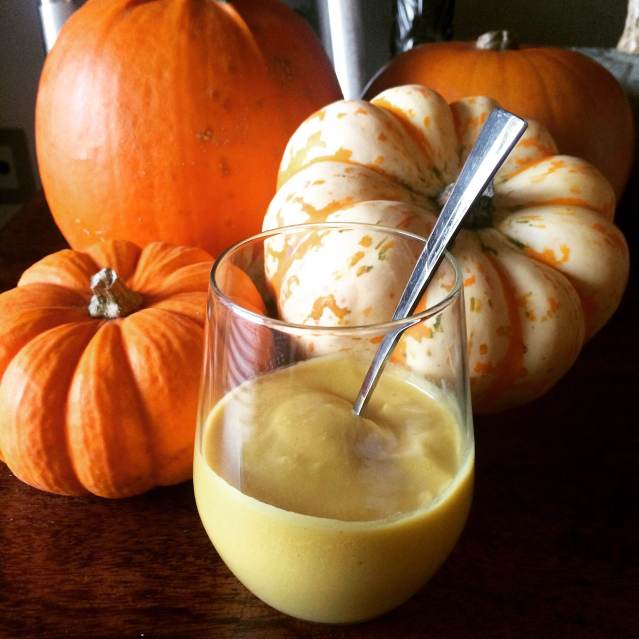 Nothing looks and tastes of autumn or the beginning of the holiday season more than pumpkin pie or pumpkin spice latte’s.  The colour, the sweet and earthy flavour attached to pumpkin pie is warming, cosy and filling – everything you crave as the leaves turn golden brown, the weather gets colder and the days shorter!

While I thought about coming up with a healthier version of pumpkin pie, I decided to try out the flavours in a smoothie.  Normally I make green smoothies, so to come up with an autumn-inspired one sounded like a nice change!  Full of Vitamin A, beta-carotene and potassium this smoothie is full of low-glycemic, mood boosting ingredients that will keep you fuller and energised for longer.

I added maca powder as I thought it complemented the earthy flavours of this recipe and added an extra energy boost.  Maca powder comes from the root of the maca plant found in Peru. Traditionally, maca has been used to not only enhance energy and mood, but also to regulate the endocrine system, particularly in women.

This recipe is perfect for using up leftovers and there are many adaptations that can be made to suit different diets.  I usually make it as a dessert as it’s on the sweet side. It’s so thick and creamy it feels like I’m having a decadent, naughty treat.

Sliced pears and cinnamon for garnish

Place all ingredients except coconut milk, and pear and cinnamon garnish into a high speed blender and blend until smooth.

Add coconut milk in small amounts and blend until desired consistency is reached.

Pour into a glass, sprinkle with cinnamon and top with sliced pears.

To make the recipe SCD Legal:  use butternut squash and honey instead of sweet potato and maple syrup

To make the recipe Low Fodmap: omit the date, pear and maple syrup/ honey, add another ½ frozen ripe banana and use butternut squash instead of sweet potato.

If you aren’t following an AIP diet you could swap out all the spices for 1 teaspoon of pumpkin spice.